Fixed Wheel Brewery > 2019 > March
March 23, 2019 By fwheelbrew in New beer release Comments Off on Cipressa – Our beer brewed in honour of “The Milan-San Remo”

Cipressa – Our beer brewed in honour of “The Milan-San Remo”

When March rolls around the corner, it brings with it the prospect of warmer days and lighter mornings. Giving us the well-needed nudge to get back on our bikes and to enjoy a ride out with a celebratory beer or two along the way.

March also brings us the very first monument race of the season – The Milan-San Remo!

The race itself, although only lasting 1 day consists of the most action-packed, drama-filled, intense final few kilometres that any rider could ask for. This year’s race wasn’t an exception, with 26-year-old cyclist Julian Alaphilippe out-sprinting the firm favourites to take the 2019 victory.

There are two climbs in the Milan-San Remo that separate the boys from the men. With the first of these two legendary climbs known as the Cipressa. So guess what, we’ve only gone and brewed a monumental beer in honour of such a monumental climb! 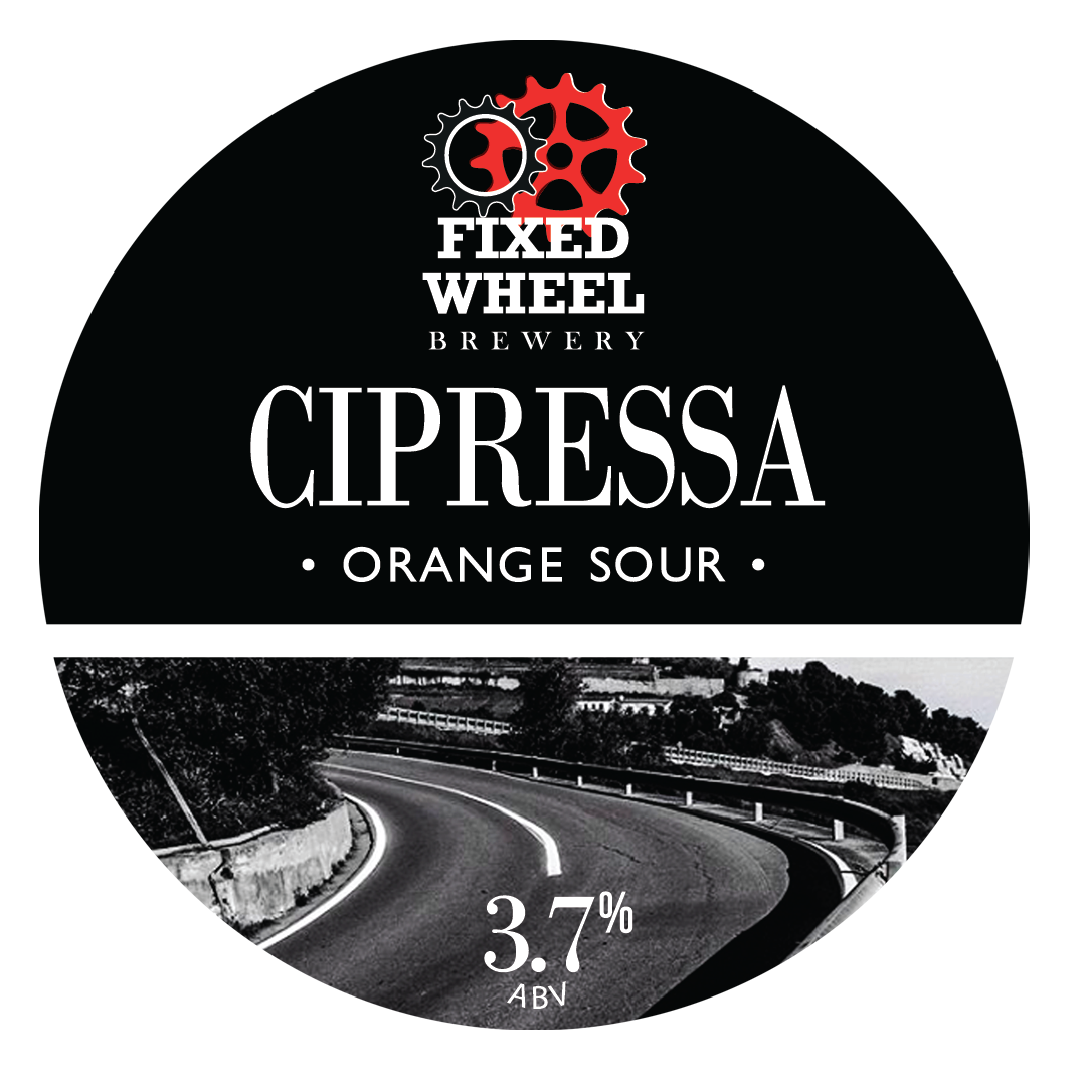 We’ve set out to make a real zesty number to celebrate the first monument race of the year. The Cipressa is an orange sour, that’s packed with an explosion of flavours. We’ve crammed in a whole load of orange zest and tropical fruit flavours that completely take over your pallet.

Coinciding with the date of the race. We will be releasing our first Pro Season Special release of the year on the exact same date. You can catch the Cipressa on our bar this weekend for its first debut and will be up on the Bar at our Micropub The Wheelie Thirsty some time in the week.

Fancy getting yourself a Keg of Cipressa? Send us a message on beer@fixedwheelbrewery.co.uk 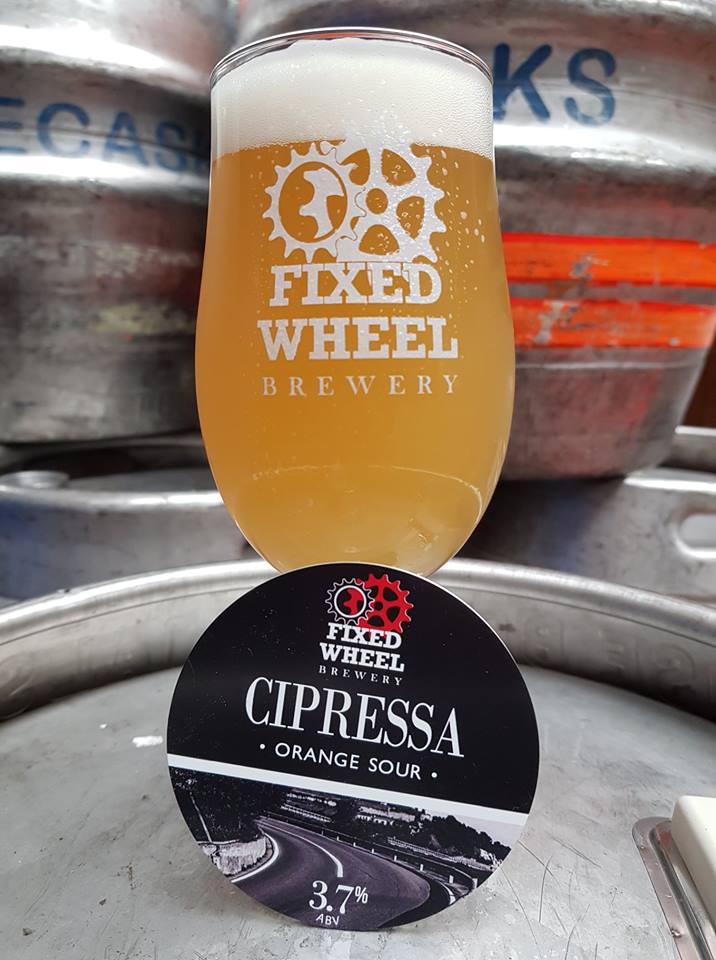 March 22, 2019 By fwheelbrew in Weekly Beer list Comments Off on Cipressa is new on the bar ready for this weekend!

Cipressa is new on the bar ready for this weekend!

YES! We’ve made it through to the weekend!
We’ve got the ENGLAND v CZECH REPUBLIC this evening. Game starts at 7:45pm ⚽️

BRAND NEW our Cipressa – Orange Sour 3.7% is out now ?? Make sure you’re giving that one a try and let us know what you think.

Some great guest beers from Burning Soul Brewing, Thornbridge Brewery & Freedom Brewery plus a massive selection of our own Fixed Wheel beers too. It’s going to be a great weekend! See you at the bar guys. ? 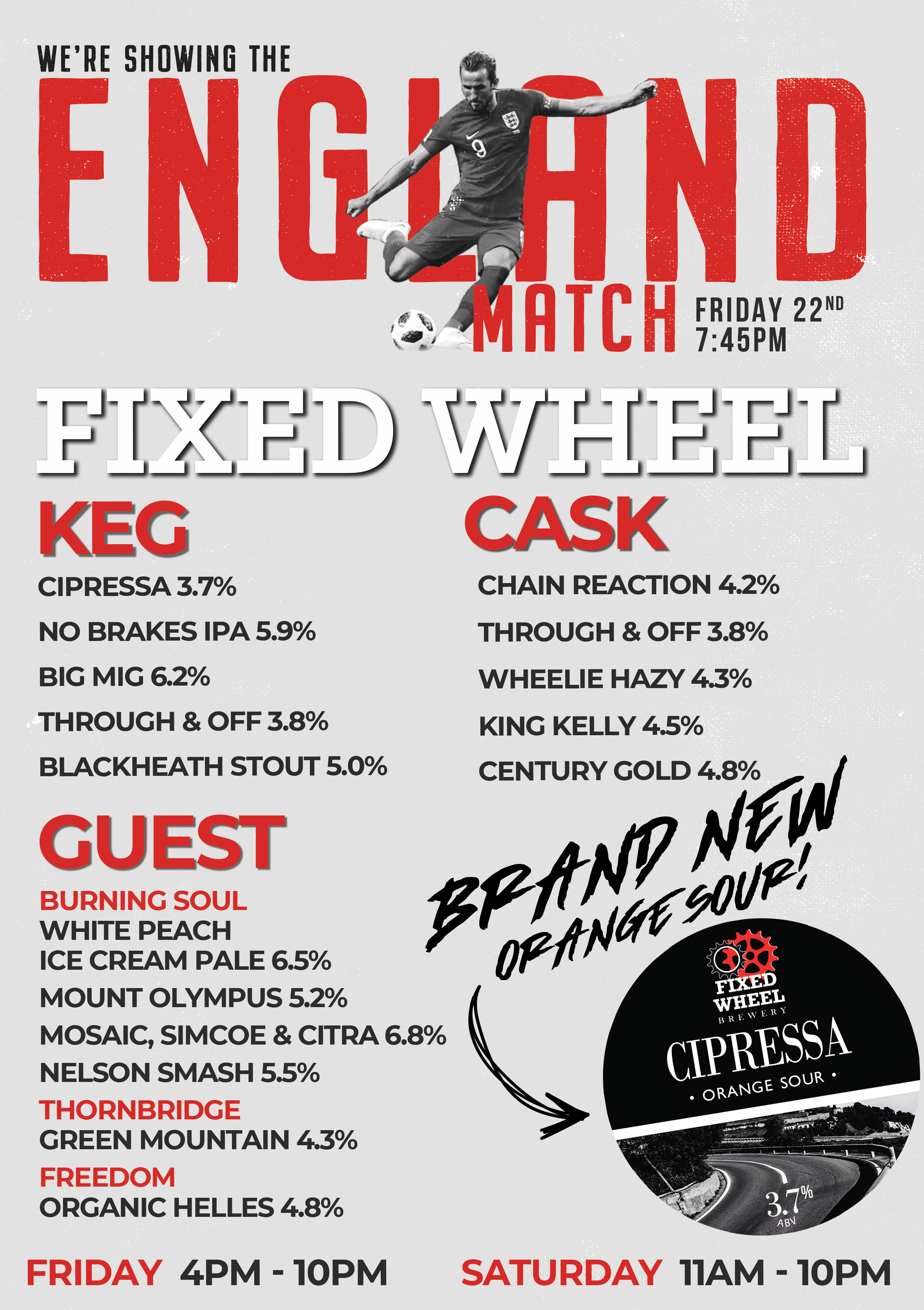 March 15, 2019 By fwheelbrew in Uncategorized Comments Off on SUPER SATURDAY

Ok, this Saturday is going to be a big one! Who’s joining us this weekend for SUPER SATURDAY! We’ll be showing all 3 games, finishing with the Six Nations – England v Scotland game kicking off at 5pm! ??

New beers on the bar this weekend, with our award-winning Blackheath Stout back on in keg. We’ve also picked out some tasty new guest beers that we think you’ll enjoy, Salopian Brewery – Minds Eye 5.8% abv & Thornbridge Brewery- Green Mountains at 4.3% abv. 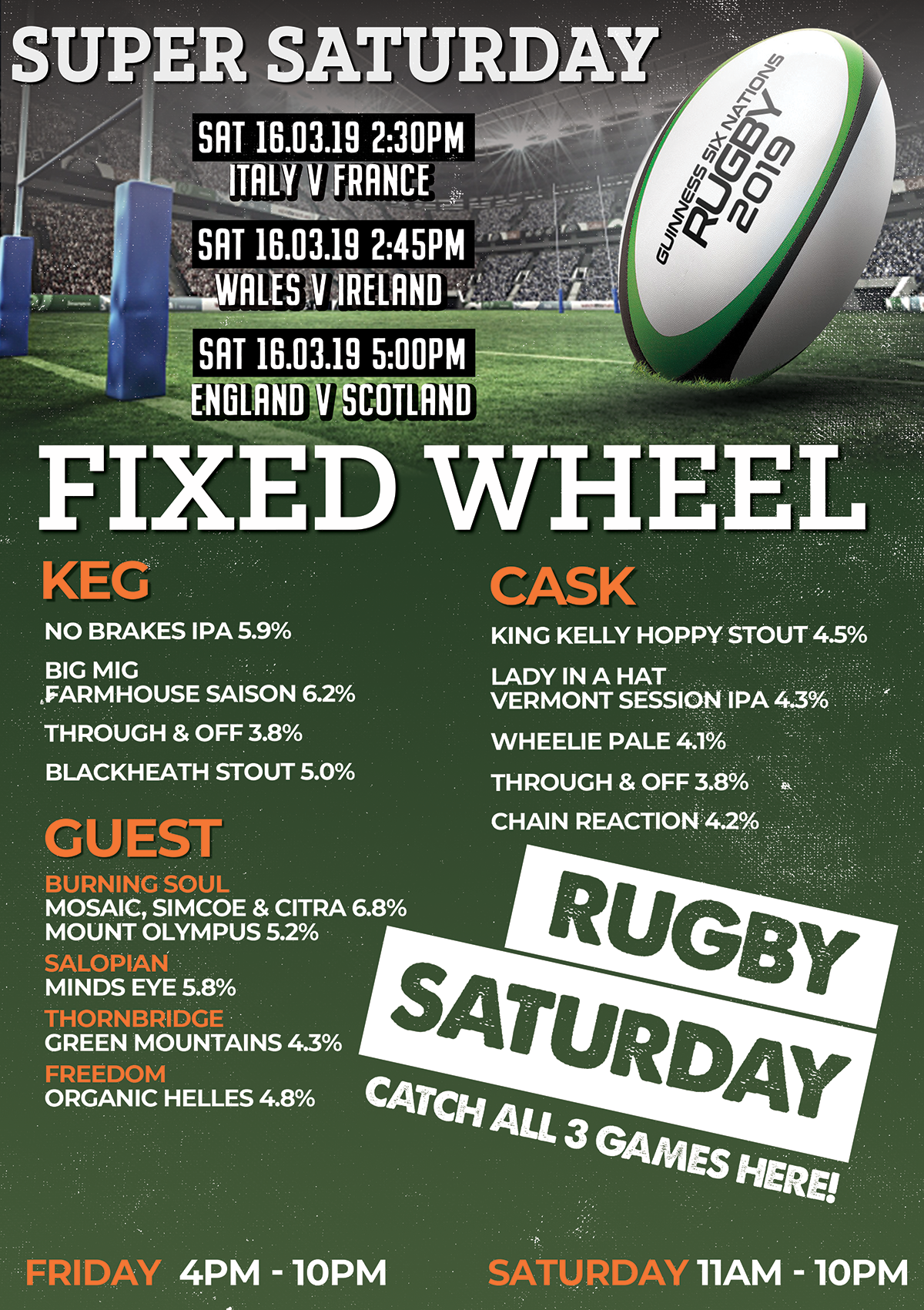 March 1, 2019 By fwheelbrew in Weekly Beer list Comments Off on Pancake day at the Brewery

Pancake day at the Brewery

It’s never too early to celebrate pancake day! I mean we would happily eat pancakes every day of the year if we could!
So this Saturday join us at the Brewery for a day full of pancakes and beer!

With Platinum Pancakes taking a break from their Digbeth Dining club slot and joining us at the Brewery from 12pm till 5pm flippin up some real tasty sweet and savoury pancake treats.
We’ve also got two of our brand new beers on the bar for you to try!

? Wheelie Hazy – Our brand new hazy IPA that’s our most recent addition to the “Wheelie” range. This Vermont Session IPA hopped with Citra, Mosaic and Cardinal at a 4.3% abv.

? King Kelly – Brewed just for March, our hoppy stout is creamy smooth and easy to drink with light notes of roast and chocolate throughout, followed by a big piney hop finish.

Also on the bar will be some tasty guest beers by Burning Soul Brewing & Freedom Brewery. 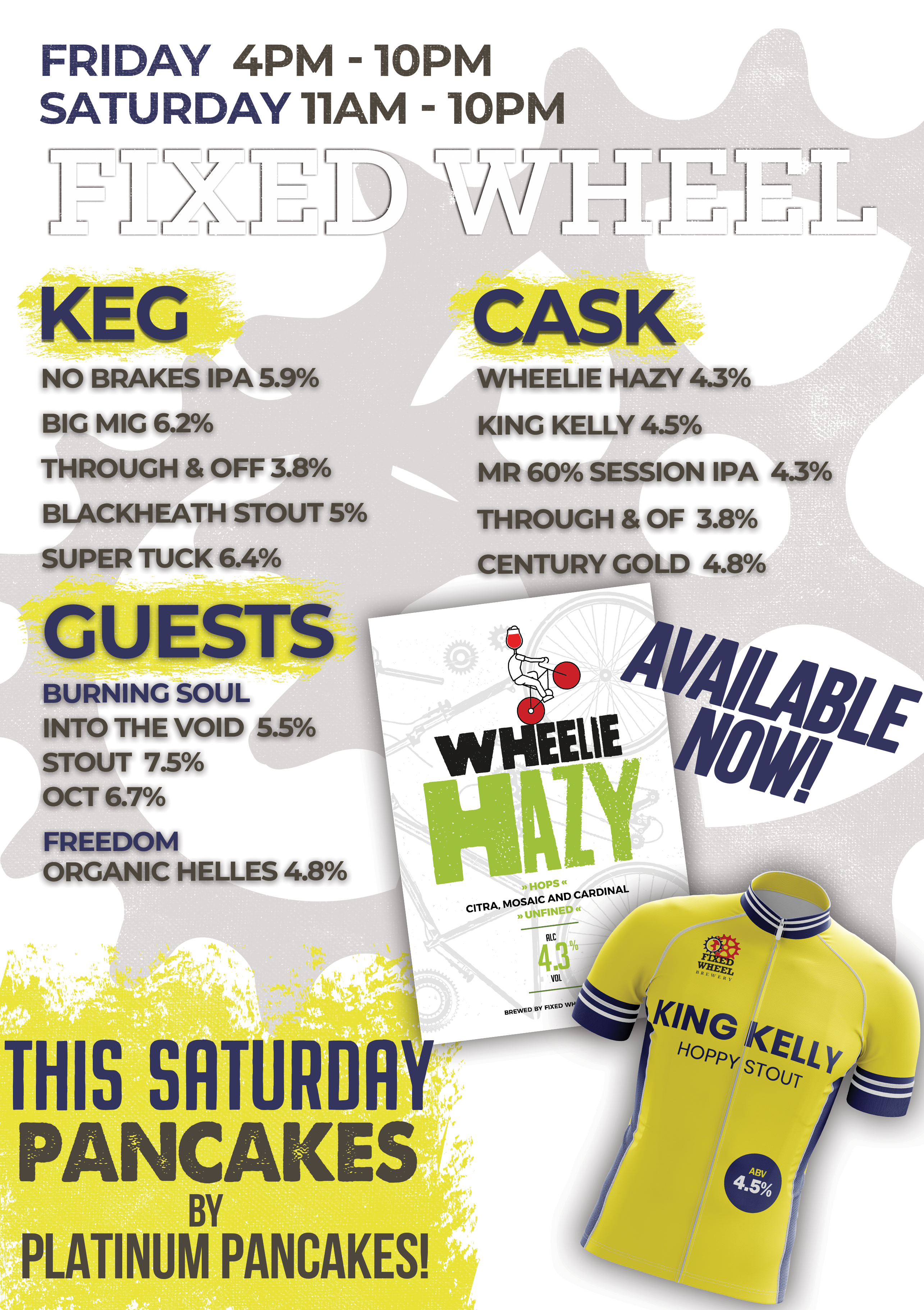